iPad User Manual's Safety Warning and Disclaimer.
Have You Read It?

Apple: "Read all safety information below and operating instructions before using iPad to avoid injury."

Printed copy of the safety information is provided with purchase. However, the manual is a small booklet of 3 1/4" x 5". The text is so small that they are practically illegible without magnifying glasses. For a legible copy, consumers have to look it up on the internet. Most parents and teachers never read it.

Here's what the manual says:

Exposure to Radio Frequency Energy iPad contains radio transmitters and receivers. When on, iPad sends and receives radio frequency (RF) energy through its antenna. The Wi-Fi and Bluetooth® antennas are located behind the screen to the left of the Home button, and behind the Apple logo. iPad has been tested and meets the SAR exposure requirements for Wi-Fi and Bluetooth operation.

A cellular antenna is located at the top edge of iPad Wi-Fi + 3G, when oriented with the Home button at the bottom. For optimal mobile device performance and to be sure that human exposure to RF energy does not exceed the FCC, IC, and European Union guidelines, always follow these instructions and precautions: Orient the device in portrait mode with the Home button at the bottom of the display, or in landscape mode with the cellular antenna (located under the black edge at the top of the device) away from your body or other objects...

If you are still concerned about exposure to RF energy, you can
further limit your exposure by limiting the amount of time using
iPad Wi-Fi + 3G in wireless mode, since time is a factor in how much exposure a person receives, and by placing more distance between your body and iPad Wi-Fi + 3G, since exposure level drops off dramatically with distance.
http://manuals.info.apple.com/en_US/iPad_Important_Product_Information_Guide.pdf

The manual warns that if a user does not handle the iPad exactly as instructed, the radiation level will exceed governments' exposure limits for humans.

Children are targeted for the marketing of such devices, but the safety warning is buried inside an online manual. Without awareness of the warning, parents let children handle the iPads as below. The iPad is often placed on the children's laps, against their reproductive organs, or in their hands which are touching the antennas.

Instead of treating the iPads as radiofrequency transmitters and receivers as declared in the user manual, parents and children treat them as toys. 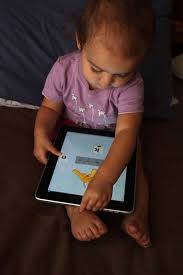 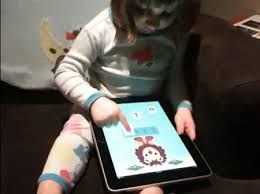 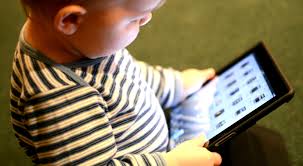 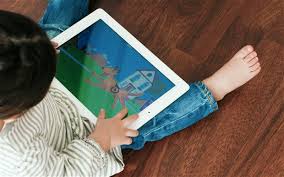 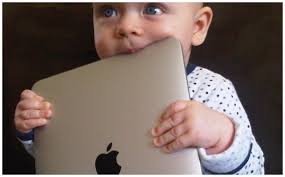 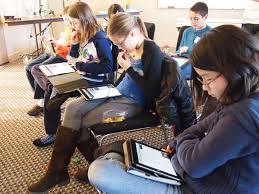 
Similar to what's admitted in the iPad's user manual, the World Health Organization's "Base stations and wireless technologies Fact sheet" states that exposure near the "source" of the radiation "may exceed international exposure limits."
http://www.who.int/mediacentre/factsheets/fs304/en/index.html

Pushing for the use of iPads in long duration = pushing for similar health consequences as seen from heavy cellphone use, except that it's now on younger and more vulnerable brains and bodies.

The literature from the WHO and Health Canada, on the "safety" of WiFi, only covers low-level background signals of routers "from a distance", it has no provision for near-field exposure to WiFi-enabled devices such as tablets and laptops. This is explicitly stated in the wording of their advice.

WiFi microwave signal, be it from a router or from a mobile device, does not stop until the router is disabled or the WiFi function of the device is turned off. It does not matter if the user is browsing the internet or not. Parents or teachers often leave the WiFi function on for convenience and hand the tablet or smartphone to children for games and apps that do not require internet connection, not knowing that the radiation continues while the child is just playing games on the device.

Also, as seen in the user manual, there are multiple antennas embedded at the back of the iPad. Children or adults definitely should not place it on their laps.*

Please take a look at the following videos:

Radiation of iPad with WiFi ON but no Internet Connection http://youtu.be/ANH6PEyQSZY

iPad iPhone Laptop Radiation Measurements
http://www.safeinschool.org/2012/01/ipad-iphone-wi-fi-radiation-and.html
* As shown in the video at the bottom of the above page, the measurement of magnetic fields at the back of the iPad (free of WiFi's RF signals) shows that even when the iPad is not on wireless mode, it's not advisable to place the unit on the lap.