The following is a letter written by Mr. Curtis Bennett to the BC Premier's Office, concerning a significant error in Health Canada's Safety Code 6, which qualifies that Wi-Fi should not be allowed in schools.

Mr. Bennett is president of Thermographix Consulting Corporation. His company investigates temperature at molecular levels for many professions. He is an educator at medical academia across North America where doctors and nurses receive education credits for licensing. Mr. Bennett testified as expert witness at the Canadian Parliament's Standing Committee on Health in 2010. He was also a first response consultant on vulnerability after 9/11.


"Health Canada isn't reporting there was a significant oversight reported (error or omission) in safety standards. That oversight is the peer reviewed science showing electromagnetic induction from the emfs is happening. That creates electrical problems with vulnerable, dynamic biology with its own electrical frequencies and causes tissue to polarize at twice the frequency.

By not reporting the error or omission, Health Canada disadvantages the province including corporations or administrations working with different aspects of wireless technology. B.C. School Districts for one are looking for the laws to administer their districts. The reported error or omission in Health Canada's Safety Code 6 qualifies that Wi Fi isn't allowed in schools and administrators, teachers as well as parents aren't being informed of that.

Radiation Protection Services of The BC Centre of Disease Control's reporting on Wi Fi Safety is seriously flawed as a result of the error or omission in safety standards. You can't exclude the frequency conflict between Wi Fi and people.


Please click the image to read the full text of the letter: 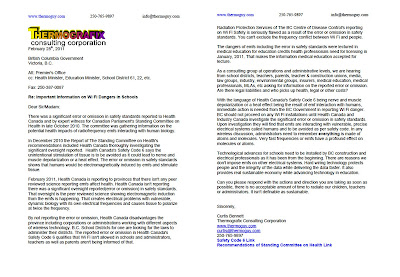