"Scientists who study radiofrequency radiation from wireless technologies have issued a scientific statement warning that exposures may be harming the development of children at levels now commonly found in the environment. Pregnant women are cautioned to avoid using wireless devices themselves and distance themselves from other users..."

"Current US (Canada) and ICNIRP standards for radiofrequency and microwave radiation from wireless technologies are entirely inadequate. They never were intended to address the kind of
exposures from wireless devices that now affect over 4 billion people."

"The combined effect of cell phones, cordless phones, cell towers, WI-FI and wireless internet place billions of people around the world at risk for cancer, neurological disease and reproductive and developmental impairments."

"We are already seeing increases in health problems such as cancer and neurobehavioural impairments, even though these wireless technologies are fairly new in the last decades or so for the general public. This finding suggests that the exposures are already too high to protect people from health harm."

"Safety standards also ignore the developing fetus, and young children who are more affected."
"The Scientific Panel urges a halt to the rollout of new wireless technologies, especially those that cause exposures for pregnant women and for children."
The Seletun Scientific Statement

1) Low-intensity (non-thermal) bioeffects and adverse health effects are demonstrated at levels significantly below existing exposure standards for telecommunications and power utility technologies in developed and developing countries.
2) ICNIRP and IEEE/FCC (Health Canada) public safety limits are inadequate and obsolete with respect to prolonged, low-intensity exposures common today.
3) New, biologically-based public exposure standards are urgently needed to protect public health world-wide.
4) It is not in the public interest to wait. Instead, governments should take decisive action now to protect biological function as well as the health of future generations.

A rapidly accumulating body of scientific evidence of harm to health and well-being constitute warnings that adverse health effects can occur with short-term and prolonged exposures to very low-intensity
EMF at biologically active frequencies or frequency combinations.

1. The Global Population Is At Risk.
2. Sensitive Populations Are Currently Vulnerable. Sensitive populations (for example, the elderly, the ill, the genetically and/or immunologically challenged) and children and fetuses may beadditionally vulnerable to health risks; their exposures are largely involuntary and they are less protected by existing public safety standards; and they may amount to 40-50% of the population;
3. Government Actions Are Warranted Now Based on Evidence of Serious Disruption to Biological Systems... the consequence of doing nothing in the short term may cause irreparable public health and economic harm, where the populations potentially at risk are very large, where there are alternatives without similar risks, or where the exposures are largely involuntary;
4. The Burden of Proof for the Safety of Radiation-Emitting Technologies Should Fall on Producers and Providers Not Consumers.
5. EMF Exposures Should Be Reduced in Advance of Complete Understanding of Mechanisms of Action.
6. The Current Accepted Measure of Radiation Risk—the Specific Absorption Rate (‘SAR’)—Is Inadequate, and Misguides on Safety and Risk.

Based on power density measurements, the Seletun Scientific Panel finds sufficient evidence for a whole-body scientific benchmark for adverse health effect exists down to 0.17 mW/m2 (also 0.000017 mW/cm2 = 0.017 μW/cm2). It is approx. 50,000 – 60,000 times lower than the current ICNIRP/FCC standards.This may need to be lowered in the future.
Editor: Current exposure standard upheld by Health Canada is at 1,000μW/cm2(microwatts/cm2). The above recommendation is at 0.017 μW/cm2. The standards set by governments for most of the other countries are currently at 10 μW/cm2 or less (down to 0.02μW). Yes, our ridiculously lenient exposure limit is 58,824 times higher than this  recommendation based on the latest scientific research. Our government is NOT taking the "Precautionary Principle" to protect Canadians. Please see "The Essential Message" on this website for more on the comparison.

Karolinska Institute is Europe's highest-ranked university in Clinical Medicine and Pharmacy. Karolinska is world-renowned for its achievements in medical and biomedical research in all disease areas.  Particular strengths are in neuroscience, cancer biology, immunology, and metabolic diseases. The Nobel Assembly at Karolinska Institute appoints the laureates for the "Nobel Prize in Physiology or Medicine".

A Significant Error or Omission in Health Canada's Safety Code 6
- Three Letters by Curtis Bennett
Mr. Bennett is president of Thermographix Consulting Corporation. His company investigates temperature at molecular levels for many professions. He is an educator at medical academia across North America where doctors and nurses receive education credits for licensing. Mr. Bennett testified as expert witness at the Canadian Parliament's Standing Committee on Health in "An Examination Of The Potential Health Impacts Of Radiofrequency Electromagnetic Radiation" in 2010. He was also a first response consultant on vulnerability after 9/11.

A letter to U.S. President Barack Obama regarding the Danger of Health Canada's Safety Code on Electromagnetic Radiation:
(Please click image to enlarge for reading) 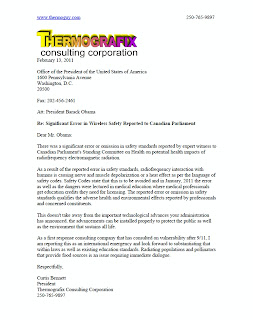 A letter to the Victoria School District on a Significant Error in Health Canada's Safety Code 6:
(Please click image to enlarge for reading) 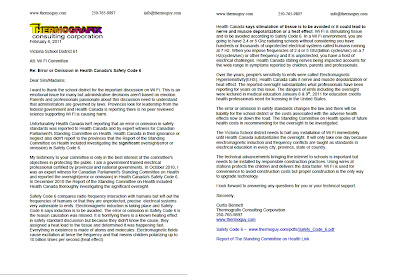 Re: Safety Code 6 Oversight Recommendations of Standing Committee on Health

Health Canada and provinces can qualify the error and omission through their existing provincial electrical standards. Electromagnetic induction on a bare conductor (human) running at their own frequency brings on a host of electrical problems for the unprotected including the heat effect. Safety Code 6 says the electromagnetic induction is to be avoided because experimental studies have shown nerve and muscle depolarization. Depolarization is part of the natural process but you don't want it initiated because of emf induction.

As an example Wi Fi in schools violates Health Canada's Safety Code 6 because the very fast frequency interaction with the unprotected children is causing electromagnetic induction associated with nerve and muscle depolarization or a heat effect.

Wi Fi is only installed for cost convenience or profit because radiating an entire area is cheaper than construction/electrical costs to install it safely. Wired computer stations deliver data faster, safer and sustainable while providing real economy while advancing technology in education.

Has Health Canada followed the recommendations of the committee and forwarded the oversight to recognized testing agencies or electrical certification? Why isn't Health Canada sharing the significant oversight with provinces? Every day of radiation is producing adverse health effects as reported by Health Canada with unrealized costs with the domino effect.

The dangers of radio frequency interaction with humans including the oversight in Safety Code 6 were just lectured in U.S. Medical Education where doctors and other health professionals get education credits they need for licensing. That makes the dangers and the oversight medical education, not just an opinion. As a professional with national and provincial credentials provided by government, I am again reporting this as a national emergency.
Sincerely


Analyzing the Health Impacts of Modern Telecommunications Microwaves
A peer reviewed and published scientific article January 2011 from University of Athens, Department of Cell Biology and Biophysics:

"In the present study we showed that microwave radiations used in modern mobile telecommunications can damage DNA and induce cell death or heritable mutations which may in turn result in reproduction decreases, degenerative deceases, or cancer. We analyzed the biophysical and biochemical mechanism underlying this biological impact, and discussed dosimetry and protection issues...
The mission of technology is putatively to improve the living conditions of the human race. Technological evolution is accomplished by use of the natural powers, such as electromagnetism. But the use of these powers and the improvement of the living conditions must always be carried out without violating the natural environment, the powers of which we are actually using, and without undermining human health. Knowing the dangers of each new technological achievement and finding ways to use technology safely, might be even more important than technology itself."

For more studies on the biological effects of Wi-Fi (Microwave) and  Radiofrequency, please see http://www.safeinschool.org/2011/01/danger-of-wi-fi-backed-by-science.html