These are the scientific studies listed on our website: http://www.safeinschool.org/p/scientific-studies.html We post the source links for all of the studies and we link to full-text as in the publications wherever such links are available.

It is important to list the studies which clearly state that EMF (at Wi-Fi and cell phone frequencies) can cause adverse biological effects, because Health Canada often makes blanket statements that there is no evidence of such effects.

Health Canada's "Weight of Evidence" approach (which they use to justify their claim that EMF doesn't cause any harm) is nonsensical. They are saying that if the number studies that don't show harm is more than the number of studies that show harm, then there's no harm, or harm is not proven - who has "more" evidence wins!

First of all, when live subjects are used, genetic differences between individuals or between groups need to be taken into consideration. Just like in the general population, not everyone who smokes gets lung cancer. Similarly, one study on chicken might yield different results compared to another study of the same substance, but conducted on another batch of chicken. However, the difference in outcome does not NEGATE the fact that the substance has caused harm on the first batch, (even though it didn't cause the same harm on the second batch). This is especially important when the concerned substance is mandated for all.

Thalidomide
Here is a U.S. Congressional Briefing by Dr. Theodore Litovitz, Professor Emeritus, Physicist, research scientist http://youtu.be/MCe0rqqyBcw. Dr. Litovitz talked about the drug Thalidomide which underwent pre-market testings in the labs. Some tests showed harm and some didn't. The health agencies approved it for sale anyway.The result - more than 10,000 babies in 46 countries were born with severe birth defects because of this drug. AND... "Canada was the last country to stop the sales of the drug, in early 1962. It is not known exactly how many worldwide victims of the drug there have been, although estimates range from 10,000 to 20,000. In 1962, the United States Congress enacted laws requiring tests for safety during pregnancy before a drug can receive approval for sale in the U.S. Other countries enacted similar legislation, and thalidomide was not prescribed or sold for decades." http://en.wikipedia.org/wiki/Thalidomide#Birth_defects
"Weight of Funding” affecting Research Outcomes

Secondly, "Weight of Evidence" is also heavily affected by the "Weight of Funding". Wireless and utilities industries and their trade associations have a lot more money to fund studies than other independent sources. As a result, industry-funded studies always out-count non-industry-funded ones. Industry funding influencing science outcome is not a conspiracy theory, it is a well-known phenomenon. Here are excerpts from the Harvard Health Policy Review.
Profit and the Production of the Knowledge: The Impact of Industry on Representations of Research Results
Harvard Health Policy Review Vol. 8, No. 1, Spring 2007
"In Canada , for example, most of the national funding agencies explicitly encourage collaborations with industry. Even the Canadian Institutes of Health Research (CIHR), the primary public funding agency for biomedical work, has embraced this trend. In fact, the federal legislation that created the CIHR has declared “commercialization of health research” and “economic development through health research” to be central goals of the agency... As a result, many of the relevant players are acting as expected and as market forces would dictate."
http://www.hcs.harvard.edu/~hhpr/currentissue/07spring/051-060.pdf


Impact of the Commercialization of Biotechnology Research on the Communication of Research Results: North American Perspective
Harvard Health Policy Review Vol. 8, No. 1, Spring 2007
"Evidence demonstrates that academic biotechnology research has become increasingly commercial in the last twenty years in Canada and in the US . This obvious realization does not only carry negative implications. Private funds have helped American universities remain on the cutting edge of scientific research and provide the best learning environment for their students. However, it would seem that this increasing emphasis on research commercialization has also created situations where university teachers and researchers could now find themselves in conflict between their traditional academic duties and the new commercial imperatives. This situation is especially worrisome in that it could lead researchers to delay the communication of important findings over substantial periods of time in order to protect commercial interests.
In our article, we first demonstrated the existence of a significant correlation between commercialization and withholding of information in the biotechnology research field in Canada and in the US . We then set out to find where and how, in the commercialization chain, the free dissemination of information was put in jeopardy. We conclude that policy changes may be required to improve the free flow of information."
http://www.hcs.harvard.edu/~hhpr/currentissue/07spring/071-084.pdf 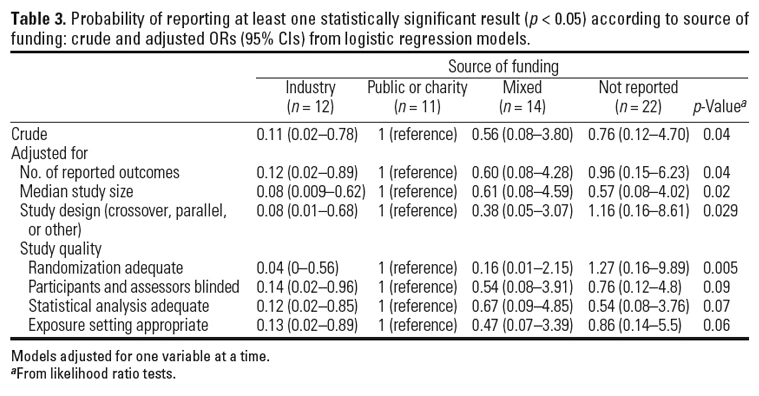 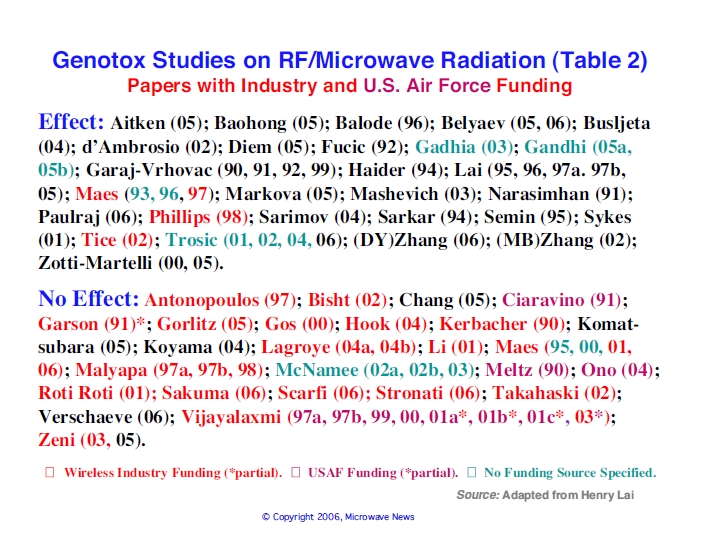 http://www.microwavenews.com/docs/mwn.7-06.RR.pdf
The Effects of Mobile Phones Electromagnetic Fields on Brian Electrical Activity: A Critical Analysis of the Literature.
“Overall, the doubt regarding the existence of reproducible mobile‐phone EMFs on brain activity.. it [the mobile phone industry] funded, partly or wholly, at least 87% of the reports. From an analysis of their cognitive framework, the common use of disclaimers, the absence of information concerning conflicts‐of‐interest, and the industry’s donations to the principal EMF journal, we inferred that the doubt was manufactured by the industry... Of the 48 studies supported by the MPI (mobile phone industry) 30 were positive and 18 were negative (38% negative)... all 7 studies not funded by the MPI were positive. Although the industry‐funded studies were significantly more likely to be negative... no two positive studies reported the same effect... Thus the apparent message of the studies dovetailed well with the MPI position that there are no reproducible biological effects, and did so without denying the existence of EMF‐induced bioeffects, which was the tactical error made by the electric power industry thirty years ago. If the investigators funded by the MPI had published only negative studies, the industry research program would not have passed the laugh test... Sixty‐two percent positive served to both protect the interests of the industry and still sustain the appearance that its position was based on scientific experiments... The legitimization process had the hallmark of a well‐designed legal strategy. Any peer‐reviewed report claiming to have shown that mobile‐phone EMFs affected brain electrical activity, particularly a report funded by the MPI, is potential evidence in a court case on behalf of a party adverse to the industry. Inclusion of a disclamatory statement in the original publication is a strategy that tends to blunt such uses by a plaintiff. Of the 30 MPI‐funded studies that were self‐designated as positive, 22 contained a disclamatory statement... From a scientific perspective the disclamatory statements were puerile, and it would be naive to suppose that so many investigators spontaneously decided to include them. More likely, the disclaimers were explicit or implicit requirements of the funder, with or without the agreement of the authors.”
http://andrewamarino.com/PDFs/CellphoneEMFs-Review.pdf
Excess Risk of Brain Cancer with 5 Years or More and/or Cellphone Use on Same Side of Head as Tumor Location or, Combinations of Wireless Phone Use: Interphone Results Versus Swedish Team Results

On the original webpage, you can click on points on the graph to get the reference information.