Using a study sponsored by Wi-Fi Alliance (companies that manufacture and sell Wi-Fi products), medical authorities are assuring parents that Wi-Fi is not dangerous. This study has nothing to do with classroom exposure. The locations measured (coffee shops, train stations, hospitals etc.) were hand-picked by the Wi-Fi Alliance members.

When they measured a laptop, they measured at distances of "1 meter or more" away (3.3 feet or more; did not specify the maximum distance). This does not take into account that children are using laptops, tablets and wireless hand-held devices in close/direct contact with their bodies, and accessing the internet simultaneously in the classroom. Every one of these devices has a client's card which is a live antenna. Actual measurement of the Wi-Fi radiation signals from these devices (see videos below) are magnitudes - up to 700,000 times - higher than reported by the industry study.

Dr. Perry Kendall's letter sent to the Ministry of Education and all the School Districts included a statement that Wi-Fi exposure is "less than 1% [ WRONG ] of what is received during typical cellphone use." http://www.sd62.bc.ca/portals/0/PDFs/IT/WiFi_Letter.pdf

He quoted a study by Foster (2007):
"Foster measured Wi-Fi radiofrequency levels at 53 sites in Europe and the US, and found that levels were below those contributed by other radiofrequency sources (typically including cell phone base stations, FM radio transmissions, and radiofrequency emissions from microwave ovens).
Also, in an interesting comparison with a pre-cell phone world, Foster showed that the median power density measured over 70-3000 MHz was similar to what was measured over 50-900 MHz in 1980 in US cities (Foster, 2007)
".

Dr. Kendall's "less than 1%" is inaccurate. Using the Foster study to back up his assurance to school trustees, school administrators and parents makes no sense.


This is Foster's 2007 study: http://www.medfordumc.org/celltower/wifirfexposure.pdf

P.2 "This study, supported by the Wi-Fi Alliance [companies that manufacture and sell Wi-Fi products]...
"The locations were chosen... in part to benefit from assistance of employees of member firms of the Wi-Fi Alliance to help with local arrangements.

"No attempt was made to provide a statistically valid sample of RF energy from WLANs in all environments in which a person might be located, however that may be defined.

P.7 "If there were a scientific need to obtain a statistically valid sample of all WLAN fields in the environment, that would require a study of different design than the present survey.

Measuring laptop: P.10 "All of the present measurements were conducted at distances of approximately 1 m
[1 meter / 3.3 feet; maximum distance not specified]  or more from the client card in a laptop computer... The user of a laptop would be exposed to stronger fields than reported here, particularly if the antenna in the client card were close to the user’s body. No attempt was made in this study to assess near-field exposures to a user of the laptop itself.
P.9 "if the AP or client card were transmitting with a high duty cycle, its output would be comparable to that of a mobile telephone in use."

First, this study (survey?) was not conducted with children in mind.  Second, this study was not done for a classroom scenario** where there are multiple wireless laptops close to students' bodies, where there are iPads in their hands and smart phones in their faces. In the study they measured ONE METER OR MORE FROM A LAPTOP. Obviously our children do not have arms longer than one meter (3.3 feet) to type on the keyboards of their laptops, tablets and iPodTouches. Even adults would not be sitting "1 meter or more" from their laptops/ Laptops and tablets often rest right on their laps.

This is a ridiculous way to measure radiation. While public health officials preach about the need for proper study-design, they seem to have no problem accepting this kind of industry-supported psuedoscience, and cite it repeatedly to the unaware public. Is children's safety really their priority?

Third, the Foster study only presented "average" measurements. They did not mention any peak level radiation (which can damage cell membrane). This is like saying that driving a car at 200 km/hr for 5 mins every hour is not dangerous, because the "average" speed including when the car is slow and when it stops at the red light comes to only 25km/hr. Similarly, if you stab at someone with a knife, can you claim the force of the knife averaged over 6 mins is low, therefore the harm is negligible? This study is an industry-sponsored and designed study to let the industry advertise that Wi-Fi emission levels are very low. These reported figures are not applicable to the exposure on our children in schools.

This study was done in 2006 when the use of wireless was a lot less extensive than now, 6 years later. Nowadays, we are not able to predict nor quantify how much the children are touching the devices, how often they load a page or whether they will be streaming videos with non-stop signals, whether they are using laptops or iPad, iPodTouch, smart phones etc. With the Ministry of Education encouraging students to use more tablets and electronic devices in the classrooms ("BYOD" - bring your own device), we need to be realistic that transmission duty cycles are getting higher and higher.

So Foster said it: "Comparable to that of a mobile telephone in use"!

Here are 2 videos to illustrate the comparison between an iPad on Wi-Fi mode and an iPhone on talking mode:

iPhone on Talking mode:
-Peaked at 19 μW/cm2 (microwatts/cm2)
-Continuous signal, but duration of use likely shorter.
-Phone will be in direct contact with the ear and head (unless handsfree or headset are used).
-Wi-Fi was turned off on this phone. 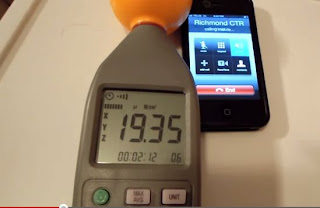 -Peaked at 70 μW/cm2; several times higher than iphone on talking mode
-Continual signals. Stop and spike every few seconds.
-Duration of use for iPad is likely longer than talk-mode on cellphone.
-iPad will be in direct contact with the student's hands or/and lap/abdomen.
-Note that there is no Wi-Fi network available. The iPad is not even logged onto any Wi-Fi network and not downloading anything. The signals are simply from the Wi-Fi feature being turned on.
-The iPad is not on airplane mode but there is no SIM card in it. 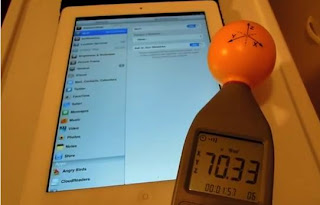 N.B. The measuring “probe” of the RF meter is actually inside the middle of the spherical casing, about 1-2 cm away from the interior of the shell (i.e. not "touching" the devices). In real life, the radiation level in direct contact with the devices (like what the children could be doing) would be even higher.

What do the above numbers mean?

China/Russia/Italy/Poland have exposure limits at 10 μW/cm2. Switzerland's general limit is 9.5 μW/cm2 and 4.25 for sensitive areas (children, elderly, medically-challenged). The Swiss doctors' group - Physicians for the Environment - recently issued a public statement calling for reduction of their limit by 10 times, i.e. to 0.95 μW/cm2. Luxembourg/Bulgaria at 2.4 μW/cm2. Salzburg Health Department in Austria recommends only 0.001 μW/cm2 for outdoor and 0.0001 for indoor exposure.  http://goo.gl/4pzyE


Minister of Education Promoting Smartphones, Tablets and Other Electronic Devices in the Classroom

iPad User Manual's Safety Warning and Disclaimer. Have You Read It?
http://www.safeinschool.org/2013/04/ipad-user-manuals-safety-warning-and.html


** Out of those 55 locations selected for the study, 35 were coffee shops, fast food outlets, general merchants, tourist visitor center; 6 were homes and hotel rooms; 4 were office areas; 6 were train stations and outdoor environments. Only 4 locations were categorized under a combined heading of  "Hospitals/health care facilities, universities" but no mentioning of classroom at all. This study has absolutely nothing to do with students using Wi-Fi in the classroom, and yet it has been cited by the Ontario Agency for Health Protection and Promotion, the Chief Medical Officer of BC, the Chief Medical Officer of Richmond and more, as an unfounded reference for the use of Wi-Fi in schools.