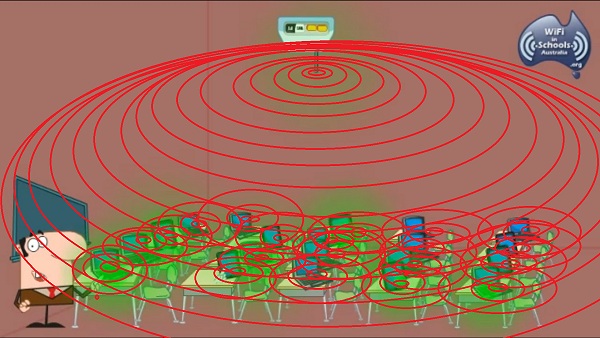 Image adapted from the excellent video
by WiFi in Schools Australia

This two-page summary contains statements from many reputable agencies and medical associations around the world. It would make an excellent and concise handout for educational meetings and conferences.


Classified Radiofrequency Electromagnetic Fields emitted by wireless communication devices" as Type 2B Possible Carcinogen (possible cancer risk to humans). The WHO report concluded that "additional research is important" and advised the public, particularly young adults and children, to "take pragmatic measures to reduce exposure". As affirmed by Dr. Robert Baan of IARC, this classification 2B, possibly carcinogenic, is not limited to cellphone radiation, it “holds for all types of radiation within the radiofrequency part of the electromagnetic spectrum, including the radiation emitted by base-station antennas, radio/TV towers, radar, Wi-Fi, smart meters, etc."

“The general population receives the highest exposure from transmitters close to the body... In children... deposition of RF energy may be two times higher in the brain and up to ten times higher in the bone marrow of the skull than in adult users. The use of hands-free kits lowers exposure of the brain to less than 10% of the exposure from use at the ear, but it may increase exposure to other parts of the body.”

Workers Compensation Act
Occupational Health and Safety Regulation
5.57 (1) If a substance identified as any of the following is present in the workplace, the employer must replace it, if practicable, with a material which reduces the risk to workers:
(a) ACGIH A1 or A2, or IARC 1, 2A or 2B carcinogen;
http://www.bclaws.ca/EPLibraries/bclaws_new/document/ID/freeside/296_97_03

Health Canada “encourages parents to reduce children's RF (radiofrequency radiation) exposure... since children are typically more sensitive" and "there is currently a lack of scientific information regarding the potential health impacts of cell phones on children.”
http://www.healthycanadians.gc.ca/recall-alert-rappel-avis/hc-sc/2011/13548a-eng.php

8.1.2. reconsider the scientific basis for the present standards on exposure...

8.1.1. take all reasonable measures to reduce exposure to electromagnetic fields, especially to radio frequencies from mobile phones, and particularly the exposure to children and young people who seem to be most at risk from head tumours;

8.3.1 develop within different ministries (education, environment and health) targeted information campaigns aimed at teachers, parents and children to alert them to the specific risks of early, ill-considered and prolonged use of mobiles and other devices emitting microwaves;

8.3.2 for children in general, and particularly in schools and classrooms, give preference to wired Internet connections, and strictly regulate the use of mobile phones by schoolchildren on school premises;
http://www.assembly.coe.int/ASP/XRef/X2H-DW-XSL.asp?fileid=17994&lang=EN

The European Union Parliament (EU)
Resolutions: 2008/2211(INI) & 2007/2252(INI)
*Both adopted with near-unanimous votes among 500+ parliamentarians
“wireless technology (mobile phones, Wi-Fi / WiMAX, Bluetooth, DECT landline telephones) emits EMFs that may have adverse effects on human health... particularly to young people whose brains are still developing... the limits on exposure to electromagnetic fields which have been set for the general public are obsolete. They do not take account of developments in information and communication technologies or vulnerable groups, such as pregnant women, newborn babies and children... the EU Parliament calls on the Member States to follow the example of Sweden and to recognize persons that suffer from electrohypersensitivity as being disabled so as to grant them adequate protection as well as equal opportunities."
http://www.europarl.europa.eu/sides/getDoc.do? type=TA&language=EN&reference=P6-TA-2008-410 http://www.europarl.europa.eu/sides/getDoc.do?type=TA&language=EN&reference=P6-TA-2009-216
http://www.europarl.europa.eu/oeil/popups/summary.do?id=1046703&t=d&l=en
http://www.europarl.europa.eu/oeil/popups/summary.do?id=1074023&t=d&l=en

The American Academy of Pediatrics (AAP)  - 60,000 Pediatricians and Pediatric Surgeons
"The differences in bone density and the amount of fluid in a child’s brain compared to an adult’s brain could allow children to absorb greater quantities of RF energy deeper into their brains than adults... the current exposure limits may not reflect the latest research on RF energy".
http://citizensforsafetechnology.org/Letter-from-the-American-Academy-of-Pediatrics-to-US-Congress,24,2818

The Austrian Medical Chamber (Österreichische Ärztekammer, ÖÄK ) 40,000 doctors:
"Wi-Fi environments will lead to high microwave exposure for students and teachers which might increase the burden of oxidative stress. Oxidative stress might slow down the energy production especially in brain cells and may lead e.g. to concentration difficulties and memory problems in certain individuals. The Austrian Medical Association recommends Wi-Fi free school environments."
http://wifiinschools.org.uk/resources/safeschools2012.pdf

Swiss Physicians for the Environment (MfE)"the risk of cancer for this type of [wireless] radiation is similar to that of the insecticide DDT, rightfully banned... From the medical point of view, it is urgent to apply the precautionary principle for mobile telephony, WiFi, power lines, etc.”

The American Academy of Environmental Medicine(AAEM)

“In September 2010, the Journal of the American Society for Reproductive Medicine ‐ Fertility and Sterility
reported that only four hours of exposure to a standard laptop using WiFi caused DNA damage to human sperm.”

International Society (17 countries) of Doctors for the Environment (ISDE) and Irish Doctors Environmental Association (IDEA) recommendations:
# Avoid Wi-Fi in home or work if possible, particularly in schools or hospitals.
# Use wired technology whenever possible.
“Because of the potentially increased risks for the foetus, infants and young children due to their thinner more permeable skulls and developing systems, particularly the immune and neurological systems, based on the precautionary principal and on the mounting evidence for harm at the sub-cellular level, we recommend that EMR exposure should be kept to a minimum.” http://www.env-health.org/news/members-news/article/isde-idea-statement-on

2012 AGM Resolutions adopted for Parent Choice and Precaution:
#18 calls on Boards of Education to "cease to install Wi-Fi and other wireless networks in schools where other networking technology is feasible."
#17 "calls on each Board of Education to have one public school at each education level (elementary, middle, secondary) that is free of Wi-Fi, cordless phones and cell phones. This school will only be equipped with wired computers and wired telephones for personal, educational and administrative purposes."
http://www.bccpac.bc.ca

United Teachers of Los Angeles (UTLA)
- 40,000 teachers & staff
2013 Resolution:
“UTLA will abide by current National NEA Policy for Environmentally Safe Schools which states that all employees and stakeholders should be informed when there are changes in their exposure to environmental hazards including electromagnetic radiation and that all stakeholders and the public should be notified of any actual and potential hazards. UTLA will advocate for technological solutions that maintain technology upgrades while not increasing employees exposure to electromagnetic radiation.”

BC Teachers' Federation (BCTF)
- 40,000 teachers
2013 Resolution:
"The BCTF supports members who are suffering from Electromagnetic Hypersensitivity by ensuring that their medical needs are accommodated in the workplace."