iPads: How Safe Are Our Children? 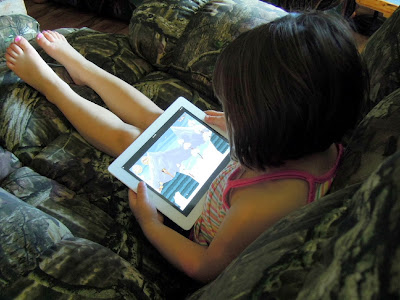 In the past few years, iPad has become many adults’ best friend and children’s babysitter. It is used as a computer, eBook reader, camera, video/music player, word processor, communication device, drawing tool, game pad, and more.

Apple says, “Read all safety information below and operating instructions before using iPad to avoid injury.” The safety information provided with purchase is a small booklet of 3 1/4" x 5", with text so tiny it is practically illegible without magnifying glasses. As a result, most people have never read the following:

“iPad contains radio transmitters and receivers. When on, iPad sends and receives radio frequency (RF) energy through its antenna. The Wi-Fi and Bluetooth® antennas are located behind the screen to the left of the Home button, and behind the Apple logo... A cellular antenna is located at the top edge of iPad Wi-Fi+3G, when oriented with the Home button at the bottom.”

When ifixit.com dissected a Wi-Fi+3G iPad, they discovered not three but five antennas, including the frame of the LCD screen being a giant antenna.

“... to be sure that human exposure to RF energy does not exceed the FCC, IC, and European Union guidelines, always follow these instructions and precautions: Orient the device in portrait mode with the Home button at the bottom of the display, or in landscape mode with the cellular antenna (located under the black edge at the top of the device) away from your body or other objects...”

This means if you don’t handle the iPad exactly as instructed, the RF radiation can exceed governments’ limits for human exposure. Unfortunately, most parents and teachers have no idea about this, and have never communicated the manufacturer’s instructions to children who are using iPads.

The user manual recommends: “you can further limit your exposure by limiting the amount of time using iPad Wi-Fi+3G in wireless mode, since time is a factor in how much exposure a person receives, and by placing more distance between your body and iPad Wi-Fi + 3G, since exposure level drops off dramatically with distance.”

In 2011, the International Agency for Research on Cancer (IARC) of the World Health Organization (WHO) classified radiofrequency electromagnetic fields emitted by wireless communication devices as Type 2B Possible Carcinogen to Humans. The monograph states: “The general population receives the highest exposure from transmitters close to the body... In children... deposition of RF energy may be two times higher in the brain and up to ten times higher in the bone marrow of the skull than in adult users.” The WHO report concluded that additional research is important and advised the public, particularly young adults and children, to take pragmatic measures to reduce exposure.

Comparison between iPad and cellphone radiation

The published radiation level of mobile devices is called Specific Absorption Rate (SAR). An iPad on WiFi/3G has an SAR of 0.76-1.19 W/kg, compared to the SAR of an iPhone on GSM/CDMA at 0.547-1.18 W/kg. Many other cellphones have even lower SAR value than the iPhone.

Governments of some countries including Canada have issued warnings on children’s use of cellphones. With iPad’s radiation level being similar to cellphones, the same caution should be taken. Health Canada, “encourages parents to reduce children’s RF exposure... since children are typically more sensitive” and “there is currently a lack of scientific information regarding the potential health impacts of cellphones on children.”

Health Canada advises the following: Limit the length of cellphone calls; replace cellphone calls with text messages or use hands-free devices; and encourage children under the age of 18 to limit their cell phone usage.

900 blasts of radiofrequency per hour

When the WiFi antenna in an iPad is turned on, it emits a burst of radiofrequency approximately every four seconds. That makes 900 blasts per hour in the child’s hands, on his lap, or at his face. This does not include any additional data signals resulting from uploading and downloading activities. Moreover, the blasts at four-second intervals occur even when the user is not accessing the Internet. In other words, even if a child is only using the iPad to draw or to play a game, he still receives 900 blasts an hour as long as the WiFi antenna is left on.

Between 2008 and 2011, the European Union Parliament and the Council of Europe passed multiple resolutions against the “early, ill-considered, and prolonged use of mobiles and other devices emitting microwaves.” Many medical associations in North America and Europe have also issued public statements to warn about the serious health risks associated with using wireless devices. Among them, the American Academy of Environmental Medicine wrote:

With the proliferation of the wireless industry, it might not be possible to eliminate all sources of RF radiation. However, a good start is to follow the European parliaments’ advice for an exposure level called A.L.A.R.A. (as low as reasonably achievable). The following resolution was adopted by the BC Confederation of Parent Advisory Council this year. While these steps were proposed for schools, they are also useful for reduction of unnecessary exposure at home:


3. to observe safety warnings and follow safety instructions in the user manual of iPad by reducing the duration of use under wireless mode and keeping the iPads away from the students’ bodies.

Note that putting an iPad on airplane mode will initially turn off all antennas on the iPad. However, WiFi and bluetooth antennas can be re-enabled without switching off the airplane mode. Therefore, an iPad showing airplane mode “on” is not a guarantee that all the antennas are off. It is important to check the antennas separately. In addition, when the WiFi function on an iPad shows “Not Connected,” it does not mean the antenna is off. It only means the iPad is not logged onto any available wireless network. To ensure the WiFi antenna is turned off, the WiFi function must read “off.”
Differences between the iPad and an AM/FM Radio
The “radio” frequency emitted by iPad is often confused with AM/FM radio waves. The two actually differ in the following ways: (1) AM/FM radio utilizes analogue signals with a continuous waveform (see diagram below). iPad (via 3G or WiFi) emits digital signals in the form of pulsed microwave, similar to cellphone and DECT cordless phones. Pulsed microwave digital signal has sharp spikes in its waveform. (2) AM/FM radio is one-way transmission, with the listeners at the receiving end only. iPad antennas, on the other hand, work in constant two-way communication. iPad is not only a receiver but also a transmitter of pulsed microwave. The user of an iPad on wireless mode is in direct or close contact with the pulsed microwave signal at its source, which is the strongest.


More Health and Safety Warnings from the iPad User Manual:

Seizures, Blackouts, and Eyestrain
A small percentage of people may be susceptible to blackouts or seizures (even if they have never had one before) when exposed to flashing lights or light patterns such as when playing games or watching video. If you have experienced seizures
or blackouts or have a family history of such occurrences, you should consult a physician before playing games or watching videos on your iPad. Discontinue use of iPad and consult a physician if you experience headaches, blackouts, seizures, convulsion, eye or muscle twitching, loss of awareness, involuntary movement, or disorientation. To reduce risk of headaches, blackouts, seizures, and eyestrain, avoid prolonged use, hold iPad some distance from your eyes, use iPad in a well-lit room, and take frequent breaks.

Glass Parts
The outside cover of the iPad screen is made of glass. This glass could break if iPad is dropped on a hard surface or receives a substantial impact. If the glass chips or cracks, do not touch or attempt to remove the broken glass and stop using iPad. Glass cracked due to misuse or abuse is not covered under the warranty.

Aircraft
Use of iPad may be prohibited while traveling in aircraft.
For more information about using Airplane Mode to turn off the iPad wireless transmitters, see the iPad User Guide.

Vehicles
Radio frequency emissions from iPad may affect electronic systems in motor vehicles. Check with the manufacturer or its representative regarding your vehicle.

Pacemakers
The Health Industry Manufacturers Association recommends that a minimum separation of 15 cm (6 inches) be maintained between a handheld wireless phone and a pacemaker to avoid potential interference with the pacemaker.

Persons with pacemakers: Should always keep iPad more than 15 cm (6 inches) from the pacemaker when the wireless device is turned on.

If you have any reason to suspect that interference is taking place, turn iPad off
immediately (press and hold the Sleep/Wake button, and then slide the onscreen slider).

Other Medical Devices
If you use any other personal medical device, consult the device manufacturer or your physician to determine if it is adequately shielded from radio frequency emissions from iPad.

Health Care Facilities
Hospitals and health care facilities may use equipment that is particularly sensitive to external radio frequency emissions. Turn iPad off when staff or posted signs instruct you to do so.

Blasting Areas and Posted Facilities
To avoid interfering with blasting operations, turn off iPad when in a “blasting area” or in areas posted “Turn off two-way radio.” Obey all signs and instructions.